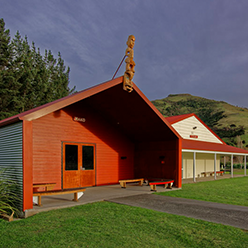 The above waiata was composed by Charisma Rangipunga for her tamariki to learn their Wairewataka, and encapsulates the takiwā and place names of Wairewa. This mōteatea was kindly gifted to the whānau of Wairewa. Wairewa Rūnanga is the modern day administrative council and representative of the hapū of Kāti Irakehu and Kāti Makō who hold manawhenua over the Wairewa takiwā. The takiwā of Wairewa Rūnanga as expressed in the Te Rūnanga o Ngāi Tahu (Declaration of Membership) Order 2001 centres on Wairewa and the catchment of our pātaka kai, Te Roto o Wairewa, and the hills and coast to the adjoining takiwā of Te Rūnanga o Koukourārata, Ōnuku Rūnanga and Taumutu Rūnanga. Sometimes these boundaries overlap and we share the responsibilities of Kaitiakitanga of Kaitōrete Spit Te Waihora, Waikākahi, Ōnawe and Akaroa Harbour.

There are place names connected with Wairewa which evoke earlier histories. One example is the mountain which Wairewa Marae lies in the lee of, Te Ūpoko o Tahumatā. This name refers to the Ngāi Tahu ancestor Tahumatā who lived and fought in Hawkes Bay. It is also special as it is the mauka we use in our pepeha, which gives us our sense of place, our sense of belonging to the landscape, as outlined below.

Makō is a great-grandson of Tanemoehau and Kurī (the eponymous ancestor of Kāti Kurī). His Whakapapa line traces from the mātāmua first born child of Tanemoehau and Kurī – Rākaitekura to his father Pūraho who is credited with leading the Kāti Kurī migration from Hātaitai to the Tory Channel in the South Island that became known as “Te-Wharauka-a-Pūraho-nui” (the big migration of Pūraho). With the death of his father Pūraho, the eldest brother of Makō, Marukaitātea (Maru) became the head of Kāti Kurī and it was under the leadership of Maru that Kāti Kurī eventually moved and settled in the Kaikōura area.

When Makō claimed the takiwā of Wairewa he did so at gathering of rakatira in Kahutara south of Kaikōura, under the mana of his older brother. This gathering was held so that the rakatira could hear first-hand the reports from Kaiapū and Tamakino who had escaped to return overland from a disastrous battle against Kāti Māmoe in Southland.
Travelling under the cloak of darkness they came to their brother-in-laws house where they were given protection.
The next morning they were greeted by the other chiefs to whom they recounted their travels. The two escapes were outlining the mahika kai they had seen on the way back. When it came to Ōhiriri, Ōtawiri and Wairewa, Makō asked
the pair what food is available there. They replied “There are many kinds’ weka, kaka, kererū, pūtakitaki and tuna”.
On hearing the bounty that was available at Wairewa Makō laid his tapatapa (claim) on the area. Shortly after an expedition consisting of Kāti Kurī and Kāi Tūhaitara led by Moki left for Te Pātaka o Rākaihautū. When Makō arrived at Wairewa he laid his Waha Ika in the waters of the lake at Tākiritāwai and proclaimed:

“Ki uta he uruka mō tōku ūpoko,
Ki tai he tūraka mō ōku waewae”
Inland a pillow for my head and on
the shores a rest for my feet.

This was a direct reference to the abundance of kai in the forests, lake and sea and by stating this Makō effectively
claimed the takiwā for himself, his family and their descendants. The profusion of kai in Te Roto o Wairewa was renowned across Ngāi Tahu and in a modern context has been referred as one of the central food baskets of Ngāi Tahu in the Canterbury region with tuna, pātiki and inanga the main kai taken.

The produce of the lake was a source of mana and pride. It allowed the people to sustain themselves and their visitors.
It also allowed food to be carried to other villages in kaihau-kai, traditional food exchanges. This is also why our
ancestors and their descendants stayed in this landscape, and occupied different pā and settlement sites including
Ōtawiri, Te Mata Hāpuku, Ōruaka, Ngutu Piri, Marokura Nui, Waikākahi and Te Puia. Poutaiki and Ōtūngakau are two
principal urupā associated with Te Roto o Wairewa. Te Roto o Wairewa is one of only two customary lakes in New Zealand the other being Lake Horowhenua in the North Island. This was acknowledged under the Lake
Forsyth Lands Vesting Act 1896, which stated

“Nothing in this Act contained shall be deemed to prejudice or affect any Māori fishing rights which may be in existence at the time of the passing hereof with respect to any part of Lake Forsyth which may not be so reclaimed
or drained.”

This is reconfirmed in the Fisheries (South-East Area Amateur Fishing) Regulations 1986, where it confirms that
the tuna fishery at Te Roto o Wairewa is for Ngāi Tahu only. In December 2010 two Mātaitai were gazetted, the first
being the Te Kaio Mātaitai from Te Kaio to Birdlings Flat, and the second being the Wairewa Mātaitai, which includes Te
Roto o Wairewa and the Tākiritāwai River. The Mātaitai offer us a formal process to gain management of these important customary food gathering areas and resources.

Built on the footprint of our three previous Whare, this is the fourth to hold the name Makō and will continue to be a place of gathering for the people of Kāti Irakehu and Kāti Makō. During the mid-1800’s our Marae moved from the hill near the current Urupā to its present day location.

The first Whare, described as a “hall for Wairewa Māori named Makō”, was built and opened circa 1855 by R. Paurini on Wairewa Māori Reserve 887 Block 1V (4) Section 22. Thirty years later, on April 16th 1885, a “new Rūnanga hall” was opened by the Hon. H. K. Taiaroa on the same site. Following a fire 33 years later, the third Whare was built and opened in circa 1918 and remained in use until January 2008. The current whare was opened on the 1st November 2008 by Rev. Maurice Gray and Taua Naomi Bunker.

As was custom, the whare kai is named after the wife of Makō, Te Rōpūake. Te Rōpūake was the eldest daughter of Te Rakiwhakaputa (her father’s first cousin). It is most likely the marriage was to cement relations between the families, and keep the Kāti Kurī lines strong on Te Pātaka o Rākaihautū. The current whare kai was built in 1991 by the whānau of Wairewa.

This website uses cookies to improve your experience while you navigate through the website. Out of these cookies, the cookies that are categorized as necessary are stored on your browser as they are essential for the working of basic functionalities of the website. We also use third-party cookies that help us analyze and understand how you use this website. These cookies will be stored in your browser only with your consent. You also have the option to opt-out of these cookies. But opting out of some of these cookies may have an effect on your browsing experience.
Necessary Always Enabled
Necessary cookies are absolutely essential for the website to function properly. This category only includes cookies that ensures basic functionalities and security features of the website. These cookies do not store any personal information.
Non-necessary
Any cookies that may not be particularly necessary for the website to function and is used specifically to collect user personal data via analytics, ads, other embedded contents are termed as non-necessary cookies. It is mandatory to procure user consent prior to running these cookies on your website.
SAVE & ACCEPT